This far and further - Voorlinden
Home

This far and further

How can we together paint a hopeful picture for the future in these bizarre times? Museum Voorlinden takes a pause in its new collection exhibition This far and further to show how artists explore other paths. Thanks to the powers of their artistic imagination, you yourself start longing for a new vista and want to contribute to change. The exhibition is now on display!

Artists are particularly good at thinking in terms of possibilities. Dreaming out loud, creating new images and different perspectives is often their great motivation. Art stimulates, challenges, moves and encourages thinking in new directions. With This far and further, museum Voorlinden offers a selection of artworks that encourage the creation of new vistas. The collection exhibition is populated by artists who take a critical look at our society, point out problem areas, take new directions with their imagination and suggest other ways of looking at things.

Director Suzanne Swarts: ‘It is time to make a change now. That requires imagination, new stories. And that’s exactly what these artists have to offer. They are constantly on the move, exploring unknown paths, discovering new possibilities. They demonstrate the makeability of change.’

Past the tipping point

The collection exhibition This far and further includes works by Ai Weiwei, Yoan Capote, Edith Dekyndt, Man Ray, Shilpa Gupta, Alicja Kwade, Kader Attia, Guido Geelen, Song Dong, Zhanna Kadyrova, Tacita Dean and François Morellet, among others. For the visitor, the exhibition feels like a journey that starts at a frazzled world, continues past a tipping point and then leads to new ways of seeing. The selected works incite desire and action; they offer starting points to visualise a hopeful and unifying future together. 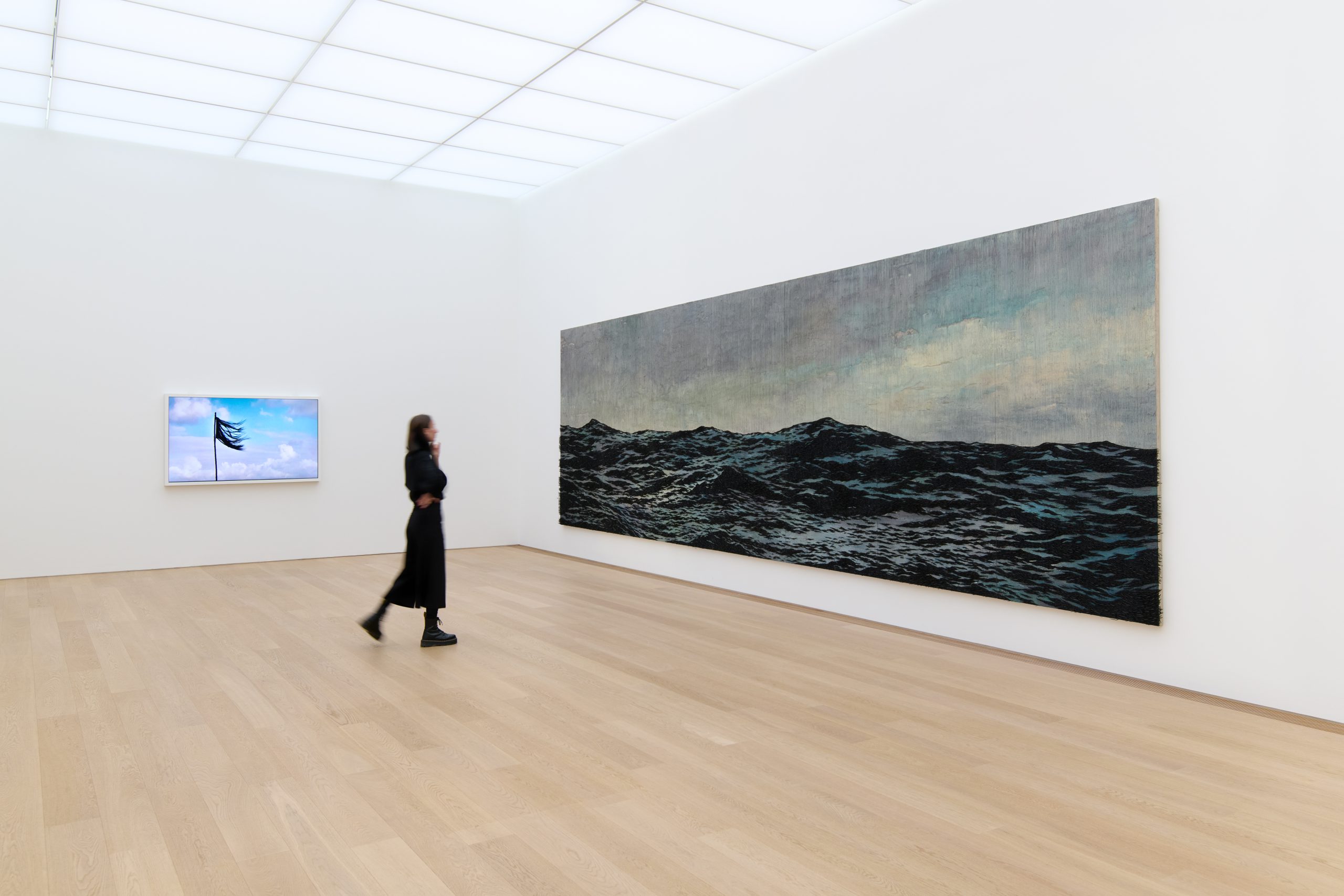 Traces of our past

The exhibition opens by establishing the status quo. Using about 220,000 sharp fish hooks on linen, Cuban artist Yoan Capote (1977) mimics in Isla (elegia) a raging sea. The work is about the isolated life on an island, where the sea imposes restrictions on you, but also provides your sustenance and offers a view of a promising horizon. That we cannot and should not forget our past is shown by Kader Attia (1970) with a swing on which he balances two prosthetic legs. In doing so, the Algerian-French artist points to the phantom pain that is still palpable when it comes to slavery, colonialism and genocide. With the prosthetics and swing, he also points to the possibility of movement on these matters.

After your visit to This far and further, you probably want more! Good news: in the accompanying catalogue, you can revisit all the artworks and galleries and continue reading the work of poet Toon Tellegen, former national architect Floris Alkemade, composer Merlijn Twaalfhoven and philosopher Joke Hermsen. The catalogue will be released around 3 January. Order the catalogue now at shopvoorlinden.nl. 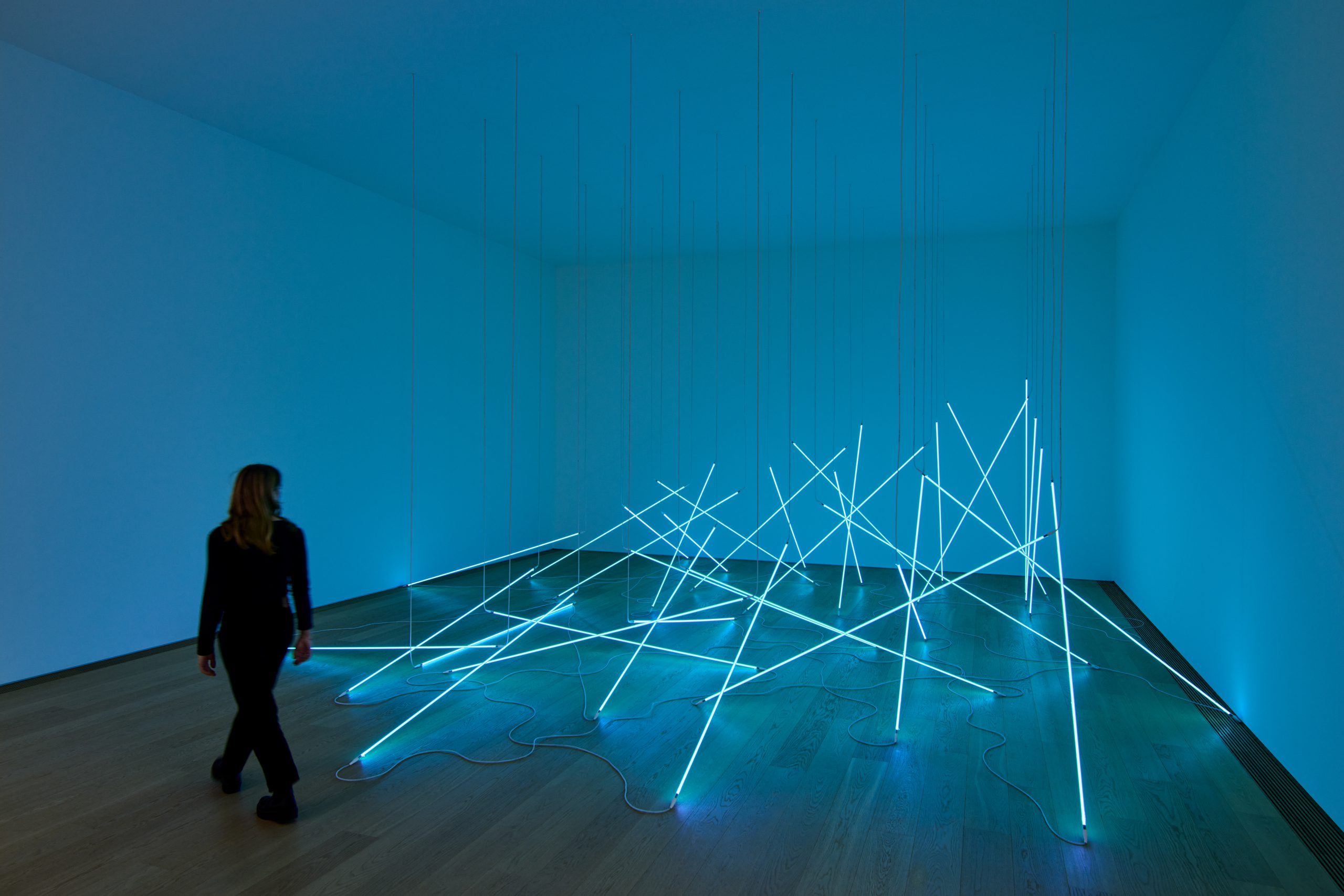 Art at the crossroads

When the old and the new do not mix well, it can lead to major problems. For instance, avalanches can occur when the new snow layer does not adhere well to the old underlayer. A small shift or bang can then have major consequences. The room-filling installation L’Avalanche by François Morellet (1926-2016) is a reminder of this. Using neon tubes, he mathematically and transparently shows the movement of an avalanche. The absolute highlight of the exhibition is Through the Wall by Song Dong (1966). Here, the Chinese artist unites past and present with wooden window and door frames, rescued from historical hutong districts, and a jumble of cheaply produced contemporary pendant lights on the inside. Walking into this work, you imagine yourself in a kind of teletime machine and your worldview is tilted. 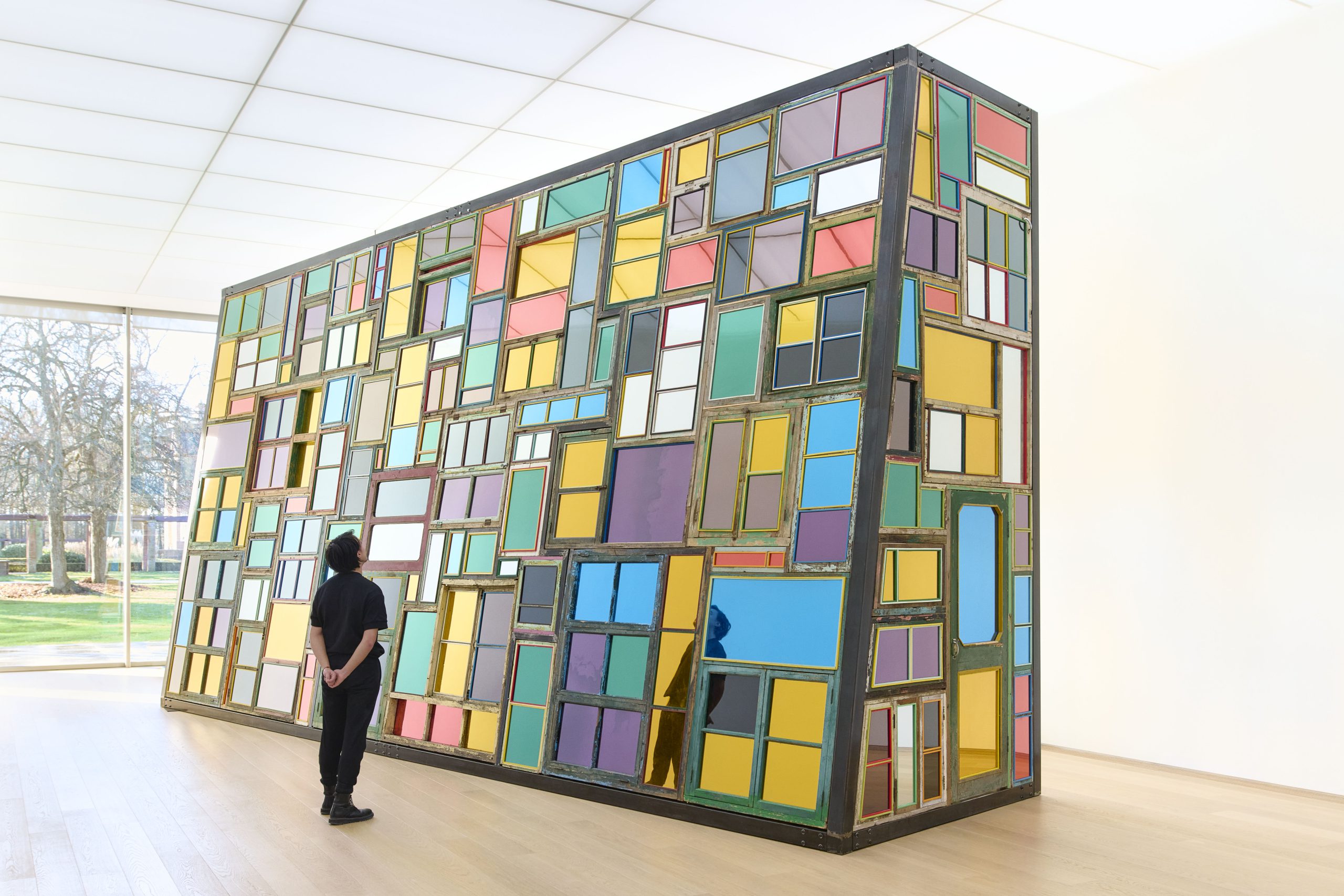 What can art contribute in times of war? The Russian invasion of Ukraine caused Zhanna Kadyrova (1981) to flee Kiev. At the last Venice Biennale, she presented Palianytsia, carved loaves of stone, some of which are included in This far and further. By selling the ‘loaves’, she as an artist can provide for the basic necessities of life for her compatriots (at the moment this means bullet-proof vests and ammunition) and give them a voice. Alicja Kwade also reaches for stone in the installation Trans-For-Men 8 (Fibonacci). The Polish-German artist encourages you to get moving with a succession of mirrors and various homemade ‘stones’. Only then will you see a transformation appear before your eyes.

Barbara Bos, head of exhibitions: ‘Artists have the unique ability to show the imbalance of today, but also the still unimaginable; they can visualise visions and futures.’ 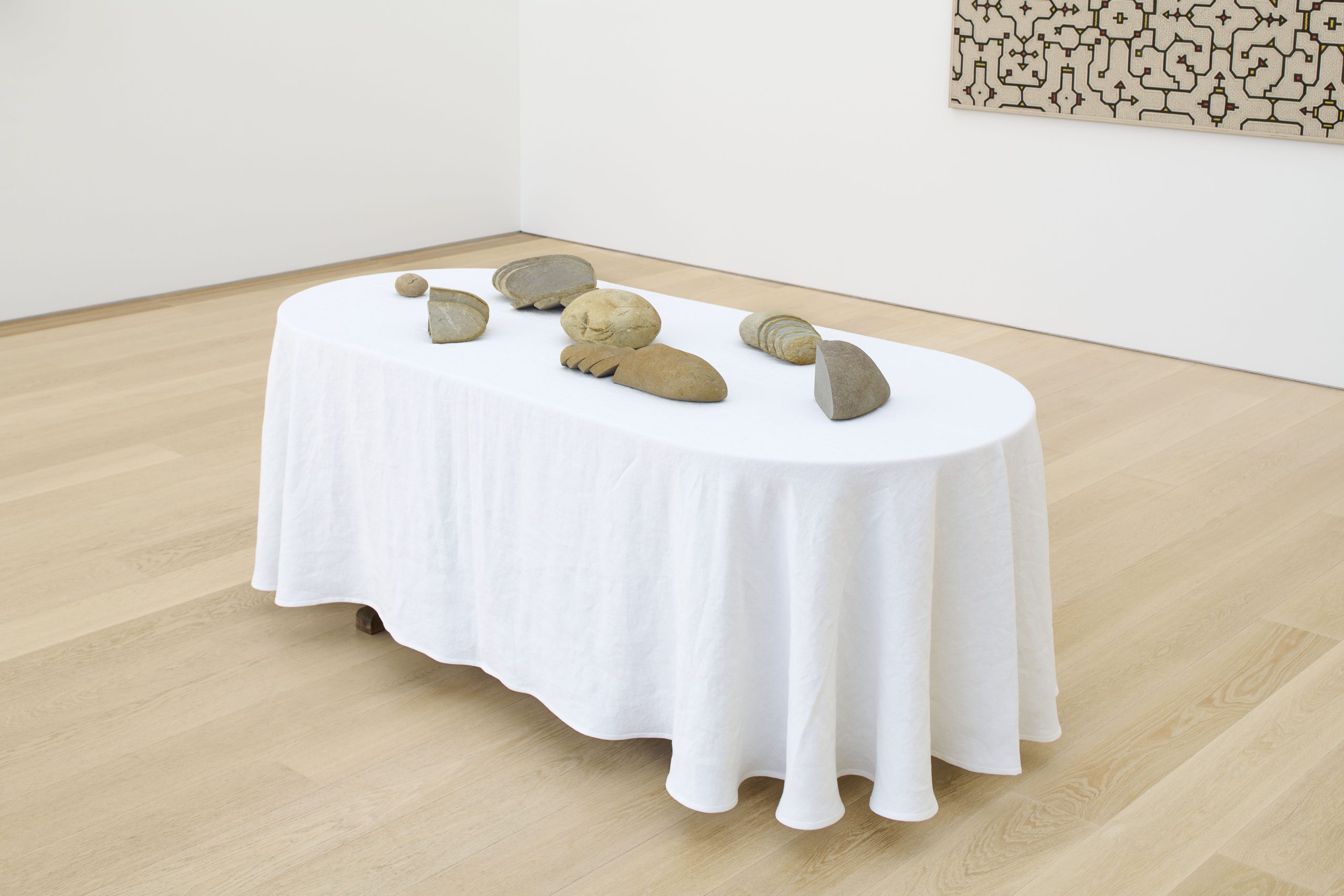 From prehistoric times to the future

Nature is as old as the world and, no matter what we do, it will eventually outlive us. That evokes awe and is exactly what you experience when you stand opposite the six man-sized and metre-wide panels called Fatigues by Tacita Dean (1965). Using chalk on blackboard, the British artist shows that overwhelming power of nature, but also its fragility; after all, the chalk drawings can be wiped away in an instant. Dean shows the traces of her making process, how she herself starts over, and thus how you can make something new from the old. Once we made our first representations of the world with chalk drawings, now we have the chance to reshape our world. 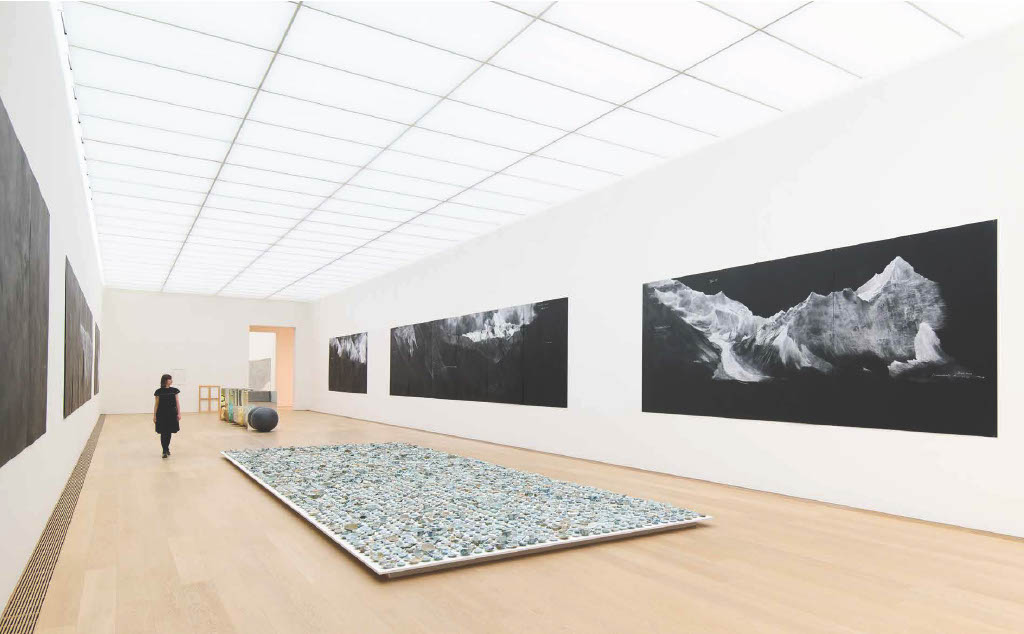 Build-up film This far and further